Where to buy? See our distributors near you! 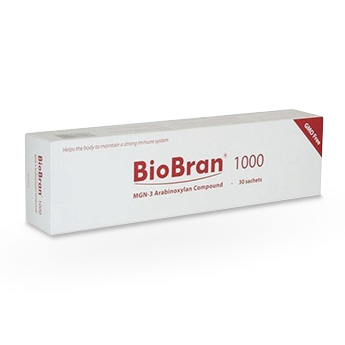 BioBran® MGN-3 Arabinoxylan Compound is a non-toxic glyconutritional nutrition supplement that has been sold in Japan and US for more than 10 years where it received a very positive customer response.BioBran MGN-3 is a nutrition supplement produced from rice bran. It is modified by shiitake mushroom enzyme to provide optimum absorption and is rich in Polysaccharides, Proteoglycans such as Arabinoxylan and other hemicelluloses. BioBran is also suitable for vegetarians and contains no Genetically Modified ingredients.

BioBran MGN-3 is manufactured using the water-soluble dietary fiber (hemicellulose B), which constitutes about 5% of rice bran, as its main source. Rice bran hemicellulose B contains as principal ingredient Arabinoxylan, comprised of xylose and arabinose as its constitutive sugars, and has the features that its structure is included in a dietary fiber and it has a comparatively low molecular weight. Derivative, which possesses immunoregulatory properties was successfully developed by partially digesting the carbohydrate of shiitake mushroom mycelia. This is a rice bran Arabinoxylan derivative. (BioBran MGN-3 Guide Copyright Daiwa Pharmaceutical.)

Easily Absorbed
BioBran is very easily absorbed into the body through the normal processes of absorption in the intestines.

Non-Hyporesponsive
There is none of the effectiveness tail-off experienced with most other supplements. This means that BioBran can be very effective long-term.

Natural and GMO-Free
BioBran is a natural food supplement made from rice bran and the enzymes of the Shiitake mushroom. It is not a drug, a synthetic chemical or genetically modified.

Non-Toxic
BioBran has been clinically shown to be completely non-toxic, even in extremly high doses (intake scaled down by body weight).

Backed by Research
Arabinoxylan compound from rice bran has been (and continues to be) the focus of scientific and clinical research, in Japan, the USA and Europe.

High Quality Manufacturing
BioBran is manufactured to the exacting standards.

BioBran MGN-3 1000 – granule powder in a sachet. Each sachet contains 2 grams of granule powder of which 1 gram is arabinoxylan compound – the active ingredient.

BioBran increases the activity of the lymphocytes – B cells,  T cells and especially NK (natural killer) cells. B cells produce antibodies whilst T and NK destroy virally or bacterially infected cells, and cells that have turned cancerous. A single NK cell can kill as many as 27 cancer cells in its lifetime.

Like many other websites, we use cookies to provide enhanced functionality and track the usage of our websites with Google Analytics, and some of our third-party advertisers might use them to deliver adverts tailored to what they think you might be interested in.

Cookies are small text files which can be sent to browser when you visit websites and saved to your device (computer or other device with Internet access, i.e. smartphone or tablet). Cookies are saved in the folder for files of your browser. Cookies usually contain the name of the website they come from and the date of origin. Upon your next visit the browser loads cookies again and sends these information back to the website which originally created cookies. Cookies we use do not harm your computer.

Cookies are used to optimally create and constantly improve the quality of our services, adjust them to your interests and needs and improve their structure and contents. We do not use data obtained by using cookies to contact users by mail, e-mail or telephone.

Majority of browsers have been originally set to automatically accept cookies. This settings can be changed by blocking cookies or by a notification in case cookies are to be sent to your device. Instructions for changing cookies are available in the option “Help” of every browser. If you use different devices to access websites (e.g. computer, smartphone, tablet), we recommend you to adjust every browser on each of them to your preferences regarding cookies.

Using cookies and permitting cookies in your browser is your decision. However, in case you change settings of cookies, functionality of some of our websites can be limited and their user comfort reduced.